Showing off our little jungle hideaway and some the adventurers who walked through and under the door. A look at the hum and bustle of the enigmatic Puerto Veijo.

As you may have noticed, my camera never stayed in the bag for long and fortunately, through no great talent I have, I have been able to get some excellent shots of these boney ponies. I had been snapping some frames of the ponies as they grazed through the field but on my return from a frosty afternoon Pilsen I was confronted with the now timid herd in the grove of some amazing trees which grow these massive root systems to support their rapid growth. 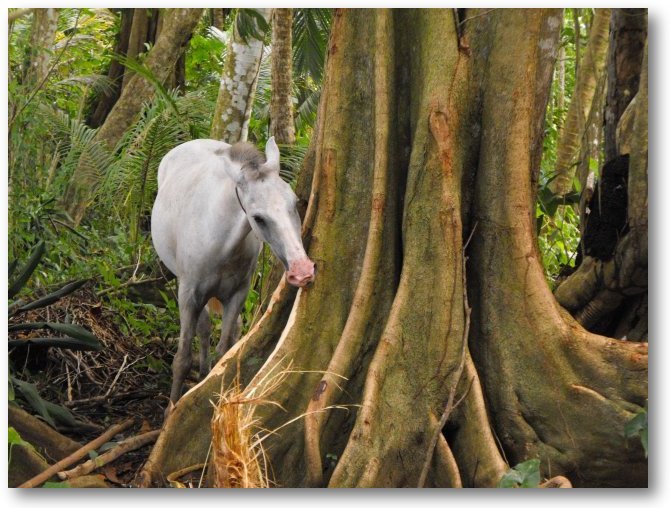 I spend a great deal of time in the forests. I am awed by the grandeur of these massive growths which here in the jungle can grow 2 meters in a year.

- More than 2,000 tropical forest plants have been identifies by scientists as having anti-cancer properties.
- Fifty-seven percent of the world’s forests, including most tropical forests, are located in developing countries.
- While plants of known medicinal value abound in the rain forest, as little as one percent of the region’s vegetation has been tested for such properties.
- Every second of every day, an area of rain forest the size of a football field is burned or bulldozed.
- Rain forests act as the world’s thermostat by regulating temperatures and weather patterns.
-A forest tree in the northern hemisphere has a leaf surface area of from ¼ acre to 4 acres.
- A tropical rain forest tree has a leaf surface area of up to 40 acres. The leaf surface is used by the tree to create plant matter and oxygen.
- We share a symbiotic relationship with trees. We exhale carbon dioxide that they absorb and sequester carbon to live. They exhale oxygen, our prime source of life.

I think that I shall never see
A poem lovely as a tree.
A tree whose hungry mouth is prest
Against the earth's sweet flowing breast;
A tree that looks at God all day
And lifts her leafy arms to pray;
A tree that may in Summer wear
A nest of robins in her hair;
Upon whose bosom snow has lain;
Who intimately lives with rain.
Poems are made by fools like me,
But only God can make a tree.
~ Joyce Kilmer, "Trees," 1914 ~

A virgin forest is where the hand of man has never set foot.
~ Author Unknown ~

I willingly confess to so great a partiality for trees
as tempts me to respect a man in exact proportion to his respect for them.
~ James Russell Lowell ~

This awesome collection of trunks, limbs and roots is clustered in and around the the public access park at Punta Uva, about halfway between Puerto Viejo and Manzanillo. While the names of the trees are numerous and unpronouncable the creeping tenacles of these monsters clutch the sandy soil and in concert with the sun forming odd shapes and shadows.

I would walk down here from our Cabina about 800 meters away and choose a cradle of roots, dust away any bugs and spiders and mould my bulbous frame into the comfy crotch of a flying buttress. Sitting quietly before the morning swimmers arrived I could hear the gentle swish of the morning surf and catch the screech of the Kingfisher as he railed up and down the little river proclaiming his territory to all. The sun seeped through the Talamanca jungle and cast the yellow rays of daybreak over the leading edge of the tangled roots which slowly softened as the light became more pervasive and the huge Arbors took on proportions of giant druids. 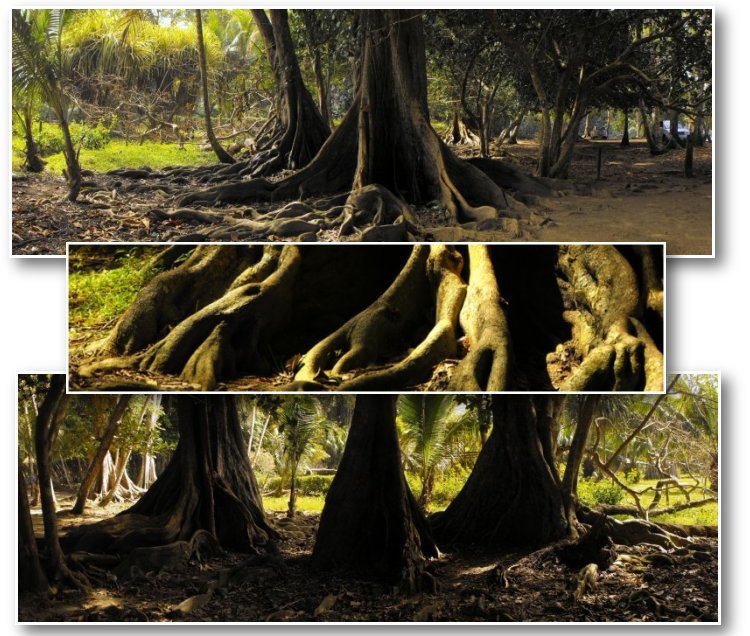 Rain forests cover about 2% of the planet’s surface and yet are home to half of the Earth’s plant and animal species. 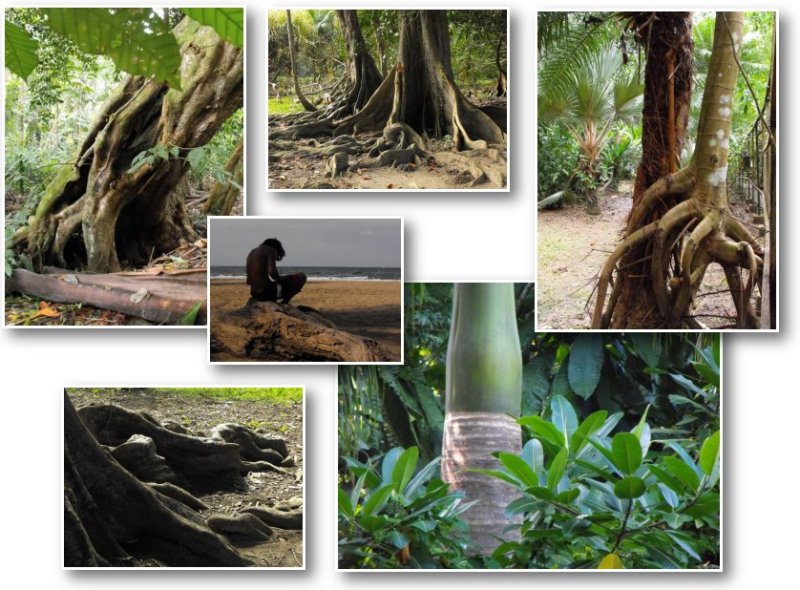 Our most efficient and cheapest form of travel were with the clunky old bikes we used while at Cabinas Punta Uva. They were our connection to all the local facilities, carting on a daily basis, eggs, juice, beer etc. from the deli and Julies' variety in Playa Chiquita. We would often combine a trip to the markets with a stop at the internet cafe next door, where we do our email and conduct our business. Most of the time we were able to work offline and then download our projects when completed. Both of us shared a small laptop which, if we go back anytime soon, means we should both have a system to work on, in spite of the added carry around weight.

There are 3 places to connect close by, at the time of this writing, but more access at the accomodation facilities is expected sometime soon. The connections you get are reliable and reasonably fast, although a trip to PV from time to time will make your internet life easier. 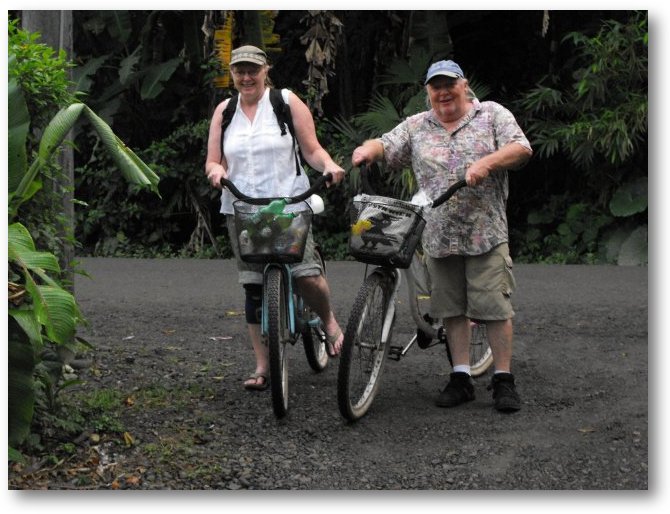 The character of our place here at Cabinas Punta Uva is similarily reflected in the many small 4 to 6 cabina operations along this stretch of the coast.
What made our stay here so special was the excellent service and friendship we received from the manager at the time, Lola Boadas. She made our stay a real warm and engaging experience, we helped each other with language and grammar, exchanging stories of our homes and culture, Canada and Catalonia and making everyone who stayed at the cabinas feel like they have come home. Thanks Lola, for making our time in Costa Rica so much richer. 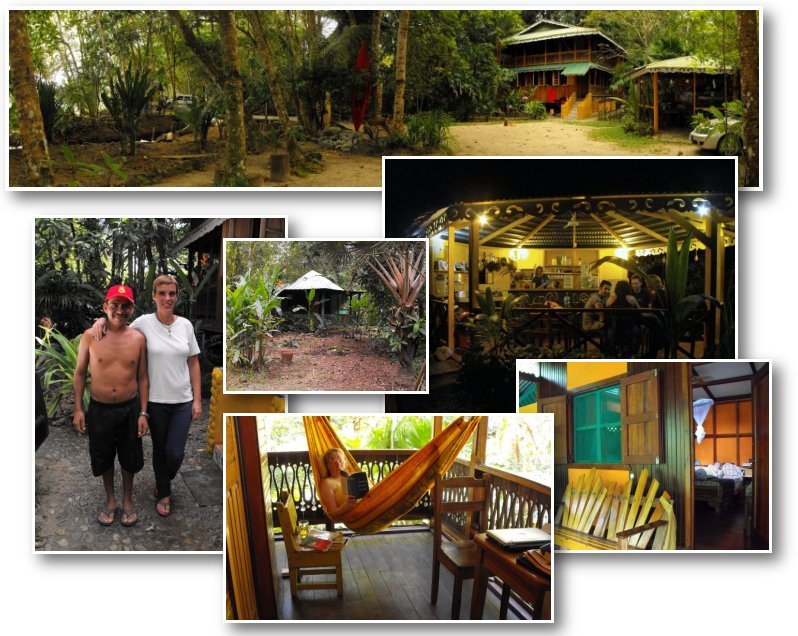 Each of the guests who arrived from December 7 to January 10 brought with them a new story of their travels and particular twist on the world around us. There exists and amazing concensus on climate change, social rights and justice issues and the importance of universal connections of thought and mind. With each idea there still exsists though, a uniquely individual method to deal with it depending on your point of origin. Different ideas will help make a better world, just keep talking.

Visitors to the cabinas during our stay included: 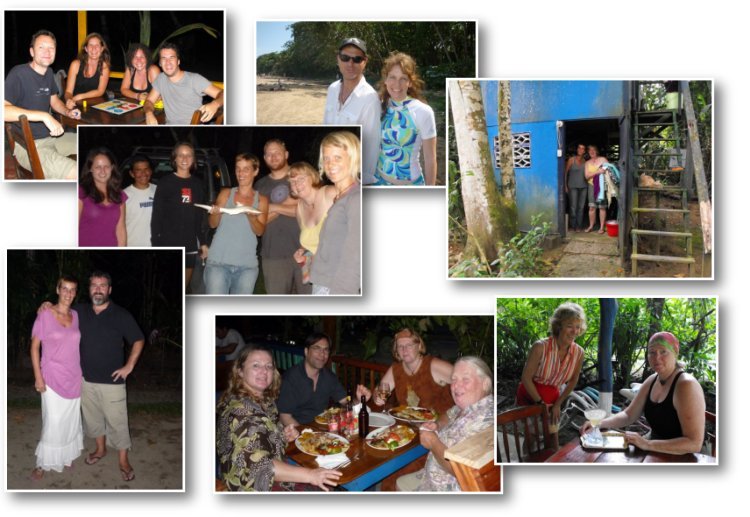 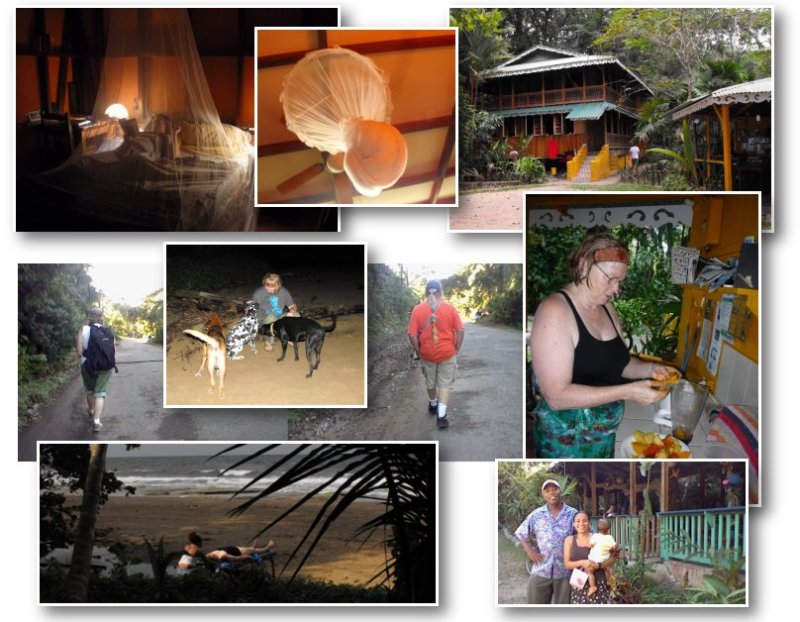 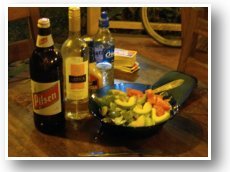 Food is the staff of life, but my preoccupation with what I need to sustain me has become obsessive.
Hunger rears it's head at least 3 times a day and I say this with humor as my time spent in a tropical climate extends itself by a couple of weeks each time I visit, it is becoming clear to me that I don't need as much to eat as once was the case.
It may be the heat, or at least the reduced requirements for heat that has lulled my body into recognizing that I eat by the clock and not by the subtle suggestions that my stomach may send to my brain and that it would be good time to replenish stocks.
I find the availability of immediately fresh fruits and vegetables and a basic but not overwhelming choice of meat, are much more suitable for my digestive tract and that it is not difficult to live on $15 to $20 a day for food. Costs for groceries are 10% to 35% less than in Canada with the extra treats like potato chips and sweets higher in cost than we are used to. Candybars, in the rural areas, are impossible to come by, and that has to be a good thing!

In the picture above Selvyn stands with a client as he oversees the final touches on his restaurant. Here he and his assisstants serve the most delicious and bountiful meals on the beach. 2 can still dine for less than $20 with a beer.
Red Snapper, Steak and Chicken specialties are available at least 4 nights a week 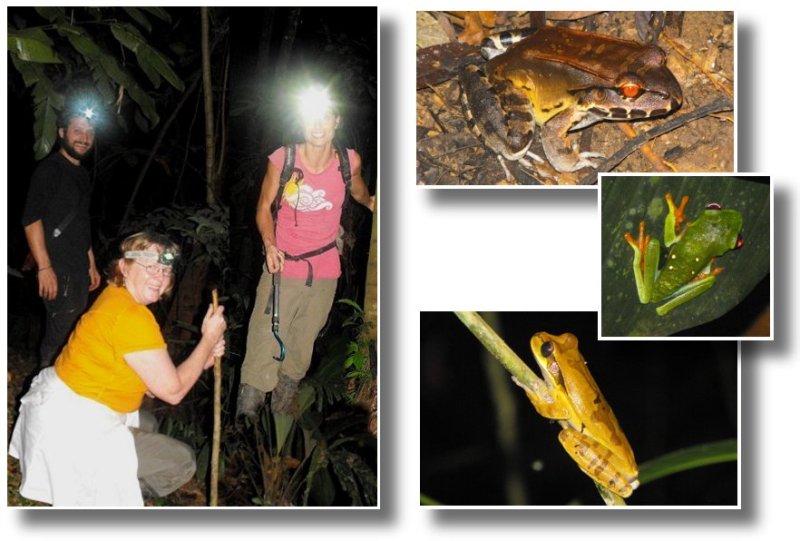 Spending a dark evening in the jungle had not occurred to me as typical tourist adventure but I was cajoled by my more knowledgeable friends that it would be a mistake to miss a red snapper dinner served on the deck of georgeous wooden jungle lodge and then on to a tour of the insect and animal life of the Talamanca mountains.

Both of guides, Christine and Mark, had done this all before and assured me, as we sized our rubber boots, that the treck through the jungle would yield some neat species. We donned our headlamps and made off for a 2 hour hike on the slippery jungle slopes.

True to their claims we spotted a number of frogs, insects and falling snakes as is the case on the "Tour Nocturno".

Day trippers have witnessed many small mammals, frogs and birds and in association with the local animal recovery and rehabilitaion facility several kilometers away have a great number of abandon and injured species on display. The images you able to get there with the captive animals and birds are the clear sharp photos that you can only dream of in the wild. 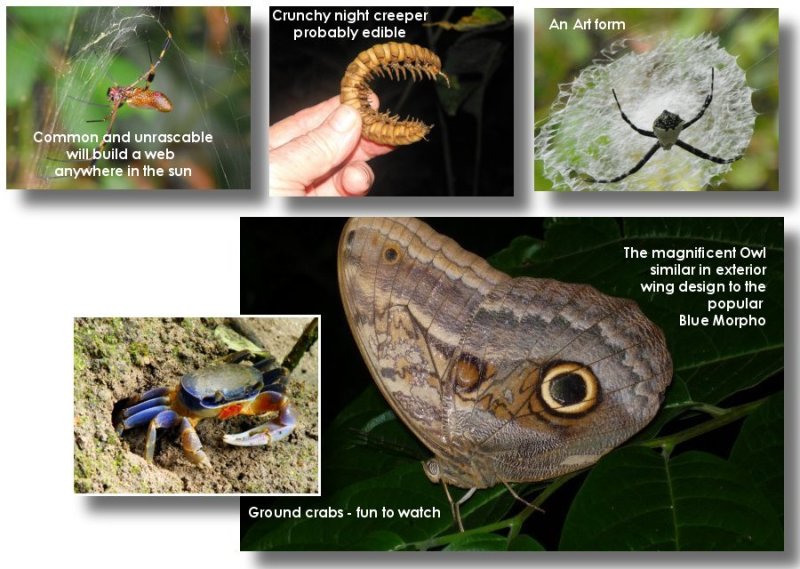 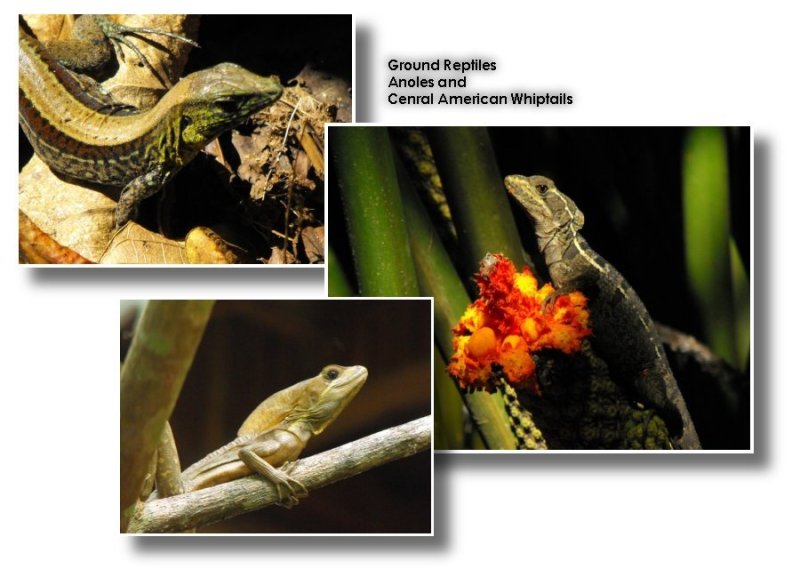 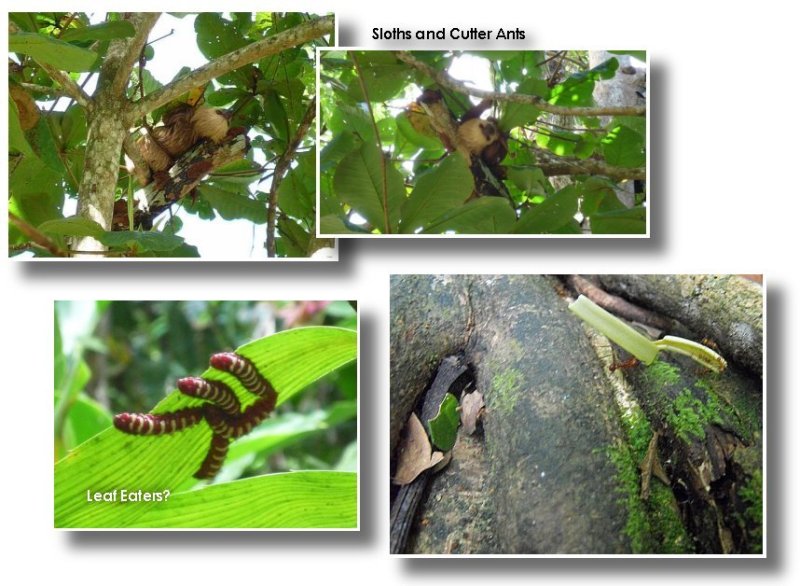 Big Green Truck - Catch the tour these guys are on: 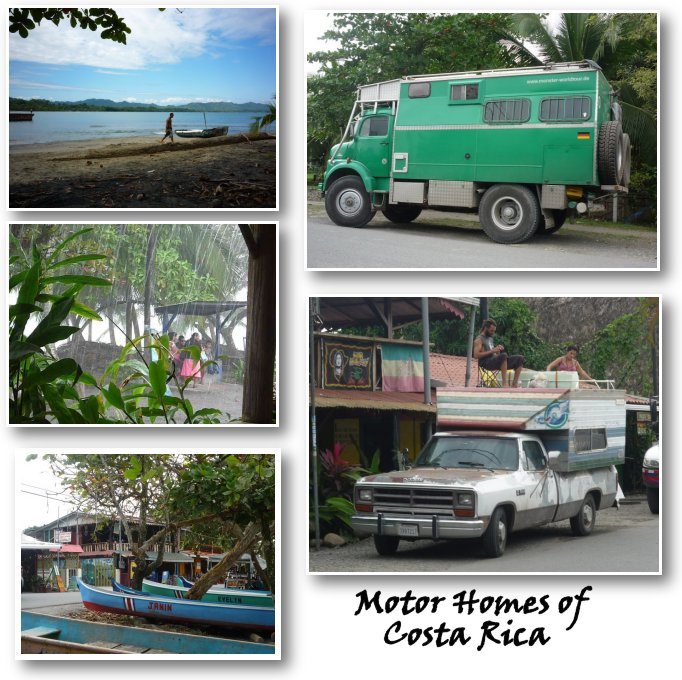 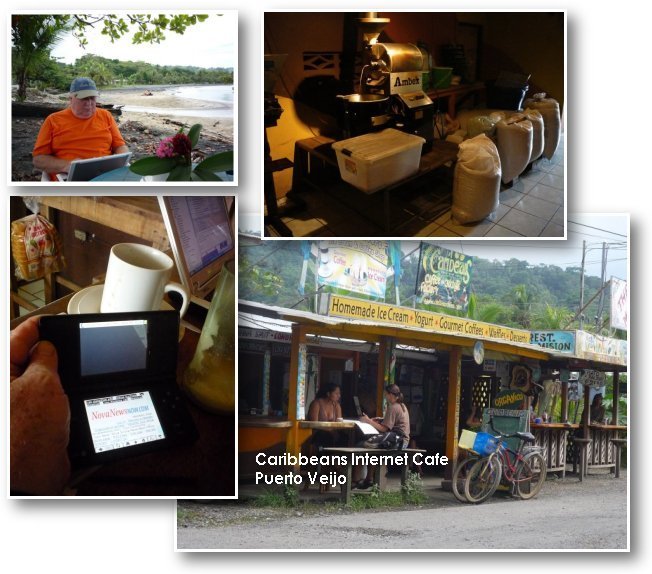 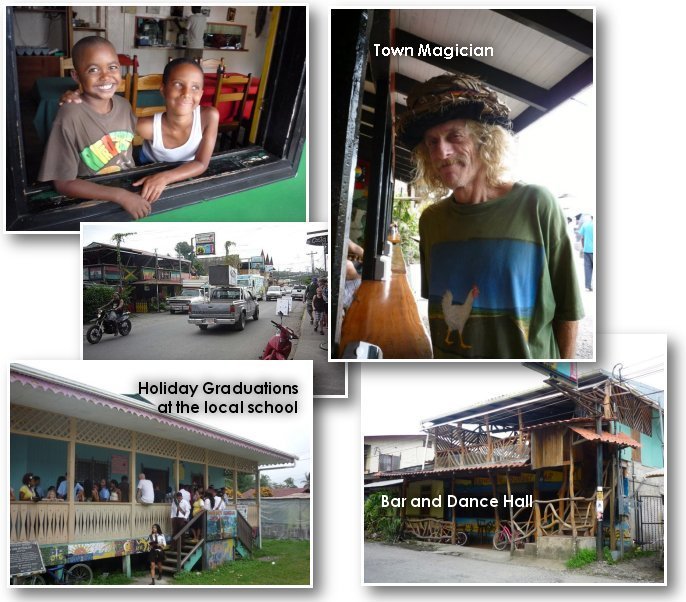 Pass on the all inclusive, bring some bug spray, buy a bacpack and go rustic next time. Drop your expectations of what you think a holiday should be, call it an adventure and you will be glad you tried it.

See you down the road.

Previous Next Table of contents

There will be lots of story to follow. I have spent the last several weeks organizing my pics.
Yjanks for dropping by. - Bill O'Brien

Comments on this blog entry are now closed to non-Travellerspoint members. You can still leave a comment if you are a member of Travellerspoint.

If you aren't a member of Travellerspoint yet, you can join for free.